Meeting dates are subject to change. Watch for agenda postings. 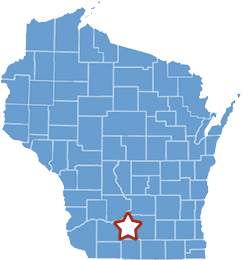 Welcome to the Town of Blue Mounds, Dane County, Wisconsin. Established as a government over 160 years ago, the town lies at the far western edge of Dane County in beautiful southwestern Wisconsin.

The early settlers, Germans and Norwegians, came to this area of Wisconsin because the land reminded them of their homeland; beautiful rolling hills, pristine valley streams, potential for bountiful crops. Farming the land was their objective and this continues today as the prime use of land in the town.

The Town of Blue Mounds is located in the far southwestern part of Dane County. It is approximately 6 miles square and contains over 20,000 acres of land.  Two villages, Mt. Horeb and Blue Mounds, exist within the geographical boundaries of the town.  The town’s population is currently approximately 900, as estimated by the Wisconsin Department of Commerce.

The first settler of the Town of Blue Mounds is also the first permanent American settler in Dane County, Ebenezer Brigham.  He came from the east coast in 1818, arriving by riverboat at the small village of St. Louis, MO.  In the next years, the lead mines of the Galena, IL area inspired him to head north.  In 1827, Brigham started for Wisconsin with an ox team, seeking lead ore.  Hostility from the Winnebago Indians forced a retreat again to Galena, but Brigham was persistent and came back in the spring of 1828 to the Blue Mounds, the most advanced outpost in the mines, where he built a cabin about ½ mile south of the eastern mound.  At that point, the only source of supplies was from Galena to the south, so Brigham took a trip to Fort Winnebago traversing the trail that ran between Lake Monona and Lake Mendota, standing at the point of the current State Capitol in Madison, and predicted that some day a village would stand at that place.

Brigham became active in early Wisconsin government, being appointed Magistrate of Territory Wisconsin.  Ironically, the only duty he performed in that capacity was to marry one couple!  As Wisconsin formed its government, Brigham was elected a member of the Council and served as Assemblyman for many years.  The Town of Blue Mounds was actually established a month before the State of Wisconsin, both in 1848.  Ebenezer Brigham died in 1861.

In the mid 1800's immigrants from Norway and Germany, looking for fertile land and freedom from government oppression, began to arrive in the town.  Eventually two villages were settled, the current villages of Mt. Horeb and Blue Mounds.  They formed their own governments, schools and churches.  In the meantime, the town also settled one room school districts, creameries within easy transport from the area dairy farms, and churches.  The schools and churches were the centers of social life for the residents, and daily news was traded as farmers brought their milk to the local creamery each day.

Modern methods of dairying in the mid 1900's brought about the end of the local creameries in the town and consolidation of schools in the late 1950's resulted in the closing of the one-room schools.  Children would now attend the Mt. Horeb Area School District, and residents of the town also turned to Mt. Horeb and eventually Madison for church and social activities.

Population growth in the town has been quite slow and steady. In 1970, the population was 635 and 2017 population is 1000.  The trend for most of the Town's history has been an average increase of about 10 residents per year.